Sunday Steeplechase: A Century of Finding and Sharing the Good in Everyone and Everything 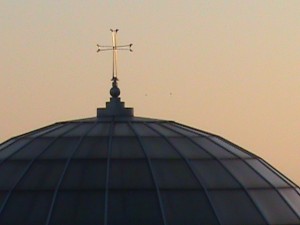 Situated on Temple Hill just below the Oakland Mormon Temple in San Francisco’s East Bay is a church that is famous both for its architecture and for the major cultural event it has hosted on its grounds each spring after Mother’s Day for more than four decades – a dazzling, welcoming, life-affirming celebration of Greek heritage that is the largest of its kind in the United States.

That church is the Greek Orthodox Cathedral of the Ascension, and that party to end all Bay Area parties is the Oakland Greek Festival – a do not miss event that will be held in 2017 on May 19.

Like Oakland’s Temple Sinai, which was profiled earlier as part of The Contemplative Traveler’s Thursday Temple Tour series, the Greek Orthodox Cathedral of the Ascension had its first stirrings in San Francisco via a Benevolent Society formed to serve immigrants who came to America in search of a better life. That first year of 1867, the society’s founding fathers filled not just the stomachs of their fellow immigrants from Czechoslovakia, Greece, and Russia but their souls – by organizing local worship services with the help of Orthodox chaplains on ships resting at anchor nearby in the San Francisco Bay. 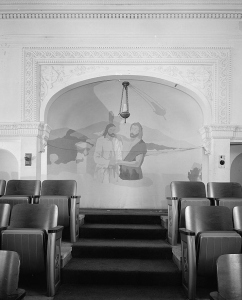 As California’s immigrant population continued to grow, an increasing number of Greek community members left the urban confines of the City of San Francisco to find better jobs and more affordable housing across San Francisco’s East Bay region. Initially, most were willing to return to San Francisco for Sunday worship services, taking the ferry time and again, but after a few years, the grind of commuting after a long work week simply became too much, motivating these East Bay Greeks to partner with their Lebanese and Syrian Christian neighbors to find a more workable solution. Together, they rented a hall in Oakland for joint worship, recruited an Orthodox priest from San Francisco and, by 1914, began offering services to their respective communities.

They also launched a new benevolent society to raise funds to support their fledgling religious East Bay Greek community and ultimately expanded their philanthropic efforts to improve educational opportunities for local children and their parents and also to help lift their neighbors from differing faiths out of poverty.

Officially recognized by the State of California in 1917, the Hellenic Community of Oakland and Vicinity saw its hard work come to fruition four years later with the launch of the first Greek Orthodox Church in the East Bay. Dedicated to the Koimisis and located in downtown Oakland, this new church complex included classrooms, a community center and worship space.

Membership climbed steadily and, by the late 1950s, the congregation’s leadership realized that more space would be needed yet again. So, they sold the old church and land, purchased new land in the Oakland Hills, and rapidly completed work on their new home.

Still modern in its appearance today, the church was dedicated to the Analypsis (Ascension of Our Savior), and opened its doors and the doors of its educational center on December 11, 1960. The first Greek festival kicked off in the early 1970s, welcoming and embracing more and more non-Greek participants each successive year, and in 1976, a community center was added to the church complex, followed by a Parking Pavilion and a Koimisis Chapel, which was dedicated to the Assumption of the Virgin Mary in 2007. 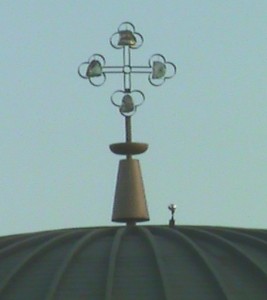 Granted official status as a cathedral in February 1992, this center of spirituality now houses the largest Orthodox icon of Jesus in the Americas – its parish the largest of any Greek Orthodox community across the San Francisco Bay Area. Among the many ministry and public service outreach projects are the cathedral’s Meal Ministry program to homeless individuals in Berkeley and Oakland, the Ascension Senior Center, the Greek Folk Dance program and Greek Evening School, which offer classes in Greek language and Hellenic culture, the Philoptochos Society, which improves “the quality of life for those in need, in a way that maintains the dignity, self-determination and independence of the client,” and a GOYA (Greek Orthodox Youth of the Ascension) group that inspires middle and high school students to engage in philanthropic volunteerism.

Parishioners of the Greek Orthodox Cathedral of the Ascension will achieve another milestone as they join with their Bay Area neighbors and friends in marking the Greek community’s 100th anniversary on November 30, 2017. A special series of events in the Fall of 2017 is slated to kick the centennial celebration into high gear. If even only half as fun as the annual Greek festival, October 6-8 is sure to be a memorable weekend.

This site uses Akismet to reduce spam. Learn how your comment data is processed.