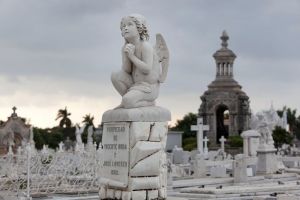 The Cementerio de Cristóbal Colón – named in honor of Christopher Columbus, but known more commonly as the Colon Cemetery – has long been one of the world’s most significant cities of the dead, notable as much for the storied histories of its permanent residents as the architectural and artistic achievements created to celebrate their lives.

The byways offer a startling contrast of exquisite, carefully tended chapels and dazzling white mausoleums – and ruins composed of tombs now empty of their former inhabitants or still occupied but poorly maintained since being reluctantly forsaken decades ago by families who fled Fidel Castro’s takeover of Cuba to live abroad in exile.

Home to pianists, poets and the revered and reviled political figures of Cuba’s greatest struggles, the Colon Cemetery opened its first grave in Havana in 1876 and has, since that time, become the final resting place of more than one million. 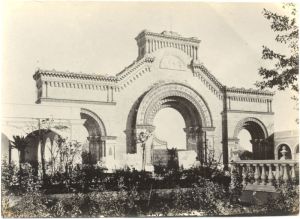 Situated in Havana’s Vedado neighborhood, this 140-acre necropolis was built above the abandoned Espada Cemetery, the city’s first true graveyard. (Prior to Espada’s opening in 1806, Havana’s dead were laid to rest in the crypts of local church catacombs. Planning for the Colon Cemetery began following a series of cholera epidemics throughout the early to mid-1800s, and intensified in 1868 when locals realized there would be a need for a larger space for their community’s dead when Cuba and other Caribbean nations were ravaged by both cholera and yellow fever.

The first occupant of this Latin American city of the dead was its primary architect – Calixto Arellano de Loira y Cardoso. Like Père Lachaise, France’s legendary necropolis, Loira’s Cementerio de Cristóbal Colón is a mini-city, traversable via its main boulevards (the Avenida Cristobal Colón, Obispo Espada and Obispo Fray Jacinto), as well as off-shooting side streets. In dividing his cemetery into quarters, Loira ensured that, even in death, the dead would remain stratified – interred in defined “neighborhoods” – pigeonholed by their respective economic circumstances, occupations, spiritual beliefs, and social classifications.

It is all too possible then, while walking away from the most beautiful avenues and their ostentatious memorials to encounter groupings of children, criminals, impoverished community members felled by disease, and Cubans who experienced religious or political persecution in their lifetimes. 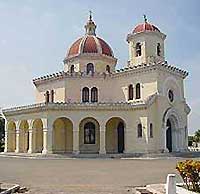 The most mindful of travelers, however, are given ample opportunity, to also elevate their thoughts. Standing before The Three Theological Virtues, a massive Carrara marble sculpture depicting faith, hope and charity, the Gate of Peace, and the cemetery’s Central Chapel, which evokes Florence, Italy’s Il Duomo, one feels hope for the future of humanity.

And memorials to Cuba’s baseball and firefighter heroes remind us all that, despite whatever differences we may have as nations, we share a common love as individuals for much of what makes life worth living. 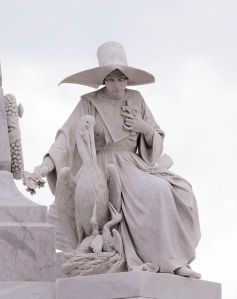 But it is the angels which top children’s graves, winged hourglasses, inverted torches, grief-stricken faces on stunningly beautiful sculptures, and other finely wrought touches that provide even more poignant moments – perhaps the most enlightening of all for those willing to linger a bit longer than most planned tour groups typically do.

For it is here, standing in the presence of those whose names have been preserved for eternity, that it is possible to reflect most deeply on the fragility of the human heart and the endurance of collective memory.

Embassy of Cuba in the U.S.A. (Tourist Visa applications and other consular services).

Traveling to Cuba (travel requirements, tips and other resources from the U.S. Embassy in Cuba).

This site uses Akismet to reduce spam. Learn how your comment data is processed.